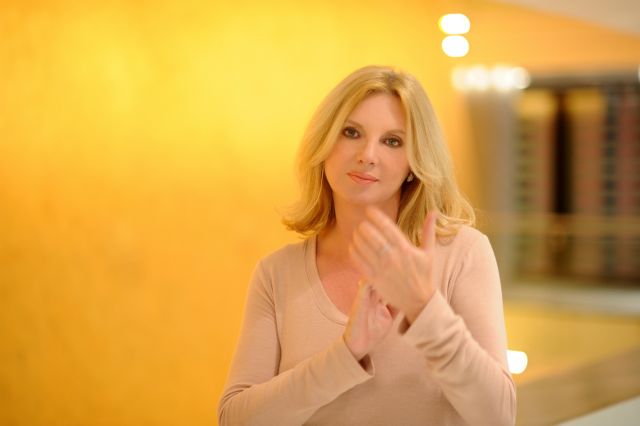 Katerina Zacharopoulou was born in Athens in 1958. She studied painting in Athens (1982-1987). She attended educational seminars on contemporary art at the Centre Georges Pompidou in Paris (1990-1994). In 1997-98 she received grants from the American Embassy, the Hellenic-American Union and the Chicago Artists International Program, which enabled her to work in Chicago Atheneum International Museum of Architecture and Design and to create an “in situ” installation, “Nymphaia”. Her artistic work includes paintings, collage, drawings, installations, photography, video, engraving, texts and audio archives. She explores the importance of memory and subjectivity in art, but also the unique relationship between artist and artwork, in relation to social customs and practices, history of art and the place of women within social reality. Since 2003, she is the presenter of the show “The Era of Images” for ERT, the Greek state broadcaster, where she interviews acclaimed Greek and international artists and other people of the art industry. 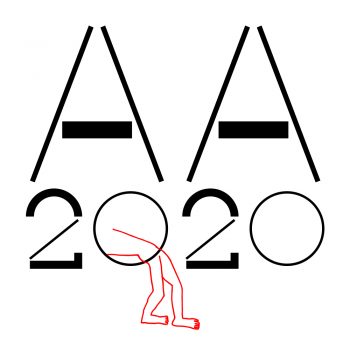 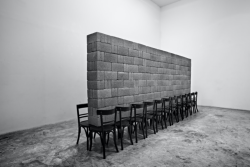 Brooklyn: Art exhibition with the participation of 100 Greek Artists. 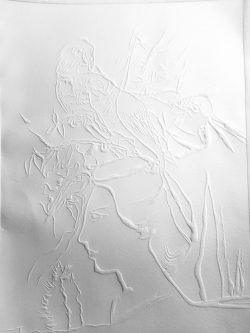 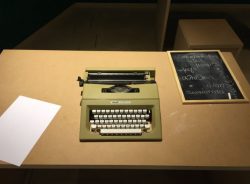 An interview with Katerina Zacharopoulou 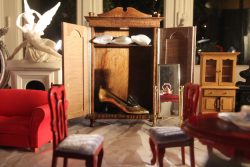 The Table of Narrations 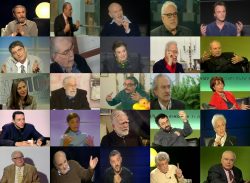 Katerina Zacharopoulou talks about her exhibition “Asking” people of the Arts 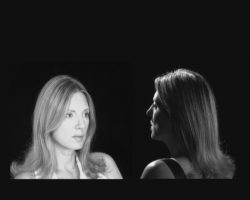 The Onassis Stegi welcomes Katerina Zacharopoulou to host “The Table of Narrations”.
Katerina Zacharopoulou asks her guests to represent spaces that mean something to them, which move them or relate to key incidents in their lives, from memory. The invitation is extended to anyone who wants to narrate memories centred on homes they lived in or abandoned, lost or dreamed of owning. “The Table of Narrations” is an open stage with rooms, furniture and household objects plus cameras that observe, record and preserve the movements of hands as they move furniture around, along with the accompanying narrations.

Visitors who haven’t applied to narrate their own narrations can follow the action on auxiliary screens set up outside the set/doll’s house.

The installation references the concepts of shelter and security, of the Home and domesticity. The work reveals a world of desires in miniature, using the arranging and rearranging of its rooms to allow people to (re)live emotions and situations that can be hard to prise out of memory, however many changes, departures and returns life may have held in store. A familiar world which at some point turned into a dream or nightmare, a reality or utopia, is rendered tangible and available by being imbued by human experience and imagination enhanced via art.

This is one of the events of the main program of the 6th Thessaloniki Biennale of Contemporary Art. It is an interactive installation-performance in which the artist-hostess invites the public to an open “dollhouse”, full of furniture and household objects miniatures, aiming to reconstruct an individual environment of home life, memories and desires.

Katerina Zacharopoulou’s “Table of Narrations” has already taken place in Athens, at the Onassis Cultural Centre in March 2017. A new version of it is presented as part of 6th Thessaloniki Biennale.

With the support of the Thessaloniki Municipal Center of Music and Dance and of the Teloglion Foundation of Art. When I first saw, behind a three-meter high glass case in Rijksmuseum, Petronella Oortman’s Dollhouse, I felt an intense pain and I was also extremely touched. In front of me lied a masterful artwork of domestic culture; an open cupboard for every curious person that wants to see—behind closed doors and windows—how life unfolds. The Dutch tradition of the shutter- and curtain-free windows reminded me of my own inquisitiveness, which, even today, far away from my childhood daydreaming, still makes me wonder about what is happening in people’s houses: what lies behind the very few visible things one can witness from the outside? How do people live their lives behind the ajar curtains and their rooms’ penumbras?
I began collecting objects; miniature furniture that seemed familiar, and I set up a world from which I could observe life’s course in tranquility. The scenographic background served the experience itself and, in turn, physically invited me inside a world otherwise impossible to access. The objects, miniatures, furniture, fragments, paper, clothes—even the music (Chopin’s prelude in E-Minor)—make the décor of an emotional empathy: The rooms constitute compartments of an imaginary and
chimerical daily round.
Petronella Oortman’s Dollhouse is an exhibit. It demonstrates the owner’s wealth in perpetuity; not merely money-wise, but even more so, as an accomplishment of her obsessiveness with beauty
and consolation.
Inside lurks the lament for female loneliness, the inability to form relationships, the recognition of absence. Empty spaces will be populated by the intentions of the Dollhouse’s viewers.
The Dollhouse is not a toy; rather, it is the simulation of a life that cannot meet its owner’s expectations.
Ibsen’s Nora leaves her household by shutting the door behind her.
Petronella Oortman opens up her house to public view: all the doors are open. Who can reassure us that this is not an act of renouncing privacy?
I sought to personate a woman who inspects her life, constructing it while holding a magnifying glass. Gestures and simple daily acts set up a timeless domestic scene: waiting; sitting; walking; mopping; daydreaming; being nervous; a glance; music; writing. For many years, I have been working on the House, as well as the narrations, confessions, and challenges of the Other. Petronella Oortman is one of the persons that direct me towards the place they can be found. She could had been an artist—after all, how did she conceive and create this masterful work? Yet, she was just a woman living in the 17th century; a rich bourgeois who followed her instinct and left behind a token of culture. It was through this token that I found the way to be able to talk about Houses-Households and unfulfilled wishes.
Today, my ultimate thought is with the women that lose their homes; the vagrant women that I often meet when I return to my own house; the homeless ones of lost families and relationships; the women residing in the city’s gloomy ground floors, which host people from many countries with different traditions and daily routines. I think of the domestic objects that act as strongholds against adversity and loneliness, getting lost in corridors of moving in and out in every possible way.
I invite Petronella Oortman to live with me for a short while; not due to some similarity that we share, but because our differences make her Dollhouse the occasion for occupancies: mine; of other people; from every direction.
My own dollhouse is not a cupboard; instead, it is projections on walls, just like people’s dreams when they emerge in the ill-lit rooms of their houses… if they own one.
We live externally our internal lives, often making protection shields made up of furniture (sofas, tables), porcelains, fabrics, framed pictures. A fortress across the roofless; small wooden shelters of extremely powerful emotional phenomena, which, once left homeless, become even more powerful. In the cupboard of glassware reside our parents and grandparents, our forming of relationships and separations are mentioned, as do our returns and departures. The Great Gesture is absent; it does not fit into the Dollhouse. The latter is the house of our expectations and their memories in time. Perhaps this is why it is not a toy.
Katerina Zacharopoulou